Meet Bill Guandolo. In 2017, Bill was diagnosed with a terminal form of multiple myeloma cancer called plasma cell leukemia and given seven months to live. Meet Frank Wiseman. Frank and Bill are business colleagues and the best of friends. Together they unpack Bill’s remarkable recovery in a podcast designed to help people live with intention, to live life to the fullest. Whether you have cancer or not.

Only about 5% of cancers are hereditary. The rest are caused by the choices we make in life.

It’s no coincidence that you’re here. Now you owe it to yourself to give one episode a listen.

One man’s cancer journey lights a hopeful path for people afflicted with cancer and chronic illness. Join Frank Wiseman and Bill Guandolo on the Deadmen Talking podcast, as they explore Bill's healing journey and the lifestyle changes that not only kept him alive, but helped him live life better after doctors told him he'd be dead in seven months. 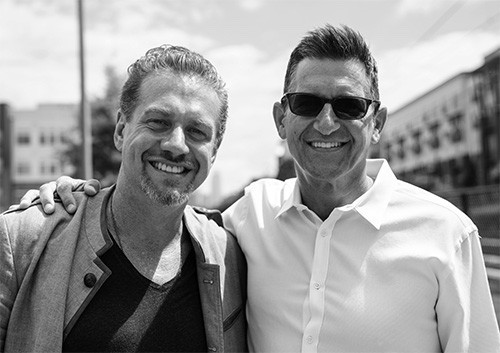 Depression: AKA The Covid Hangover

During the pandemic, depression cases tripled by volume.   Bill and Frank discuss the different types of depression and how the disease has affected both of them in their lives.   If you are a person that is having dramatic mood swings, feeling like the world is against you, not being able to get the energy to get out of bed (I think I am going to watch Netflix again all day), or having trouble controlling your temper check with your doctor, you could have clinical depression and it can be treated.

All resources from this episode are available at:
www.wearedeadmentalking.com/resources

By listening to this podcast you agree not to use this Podcast as medical advice to treat any medical condition for your or other.   Consult a Physician for any conditions you may be having.

Fear: What do you do when you are scared of dying?

Frank realizes he under estimated how easy it is to breathe through and to become positive when someone tells you that you are are dying.   This episode is an eye opening example of Frank dealing with the fear that he told us that we should overcome in Season One.   If you listen to any episode it should be this one, Fear is is excitement without breathing

Season 1 Finale…Creating a Plan to Heal

Season 1 comes to an end for DMT with an episode that puts it all together into a step by step plan of attack to heal.   The HEALIX program is a methodology that allows people to develop a process that promotes healing but more importantly fits into their lifestyle.

Executing consistently is the key to any program.

By listening to this podcast you agree not to use this Podcast as medical advice to treat any medical condition for your or other.   Consult a Physician for any conditions you may be having.

Happiness…will the Chappelle Show heal you?

Bill and Frank discuss how finding what makes you happy in life will give your body the energy to help it heal.  Can laughter heal your soul?  Tune in and listen how it changed Bill’s life.

SLEEP – THERE IS NO SLEEP WHEN YOU’RE DEAD

Bill discusses the critical role that sleep plays during chemotherapy. Creating great sleeping habits is as vital, if not more important, than any other facet of recovery.   Your body recovers, grows, and heals while you sleep.

How to Sleep Well by Dr Neil Stanley

Exercise: How to exercise during Chemo

As a former college football player, Bill was always strong and able-bodied. To say that cancer affected his physical strength is an understatement. How can anyone be expected to keep up their strength to exercise when chemo is killing not only the cancer cells, but muscle cells as well? Bill discusses his challenges with exercise and how he built a plan that worked.

The funny thing about life is that while you’re going about it, hustling and living to your fullest, it’s hard to know what you could be doing better. Perhaps you’ve strayed from eating healthy. Maybe you could stand to exercise a little more. It’s just that when we’re busy, we tend to cut corners—leading to unhealthy routines that can have dire effects.

In 2017, Bill was just this regular guy living life like everyone else. Great job. Great family. Good health. That’s why he was blindsided when he diagnosed with an aggressive form of leukemia and given seven months to live. After his diagnosis, and during his early chemo to stop the deadly cells from spreading, he got to work on why this happened. And, of course, how to beat his prognosis. The news hit his work colleague and best friend Frank hard. As Bill began to recover as the result of non-traditional techniques, Frank committed to expand Bill's research and make changes to his own life. What the hell, right? Together they discovered that only 5% of cancers are hereditary. The rest are caused by the choices we make in life. So these two friends set out to reevaluate their life choices and began making intentional changes.

Bill’s still with us and has been diagnosed as cancer-free. Frank is healthier than ever. Both men are extremely happy.

For one of the most honest and unique approaches to beating cancer and living life to the fullest, give the Deadmen Talking Podcast a listen.

Please fill in your info to subscribe to our newsletter

Subscribe to our newsletter. It's an act of intention.